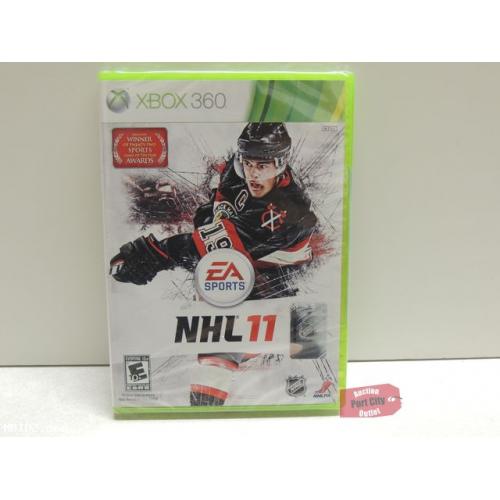 Celebrating its 20th year, the franchise that captured 22 Sports Game of the Year' awards has raised the bar yet again with NHL® 11. Powered by an all-new Real-Time Physics Engine, NHL 11 lets you create highlight reel moments as you experience adrenaline-pumping NHL action with bigger hits, broken sticks, and faster dangles. Whether you're beginning your career in the Canadian Hockey League, dominating rivals in the EA SPORTS Hockey League, or assembling Hockey's Ultimate Team, any moment can be a WOW' moment with NHL 11.

Revolutionary Real-Time Physics Engine - Pioneering the next step forward in team sports video game realism, the all-new Real-Time Physics Engine brings real-world highlight reel moments in-game like never before. From face-offs to body checks, real-world puck and player physics trigger true-to-life reactions. Now anything can happen, including the ability to shoot and make plays while lying on the ice.
More than 200 Gameplay Enhancements - An all-new faceoff system, quick dekes, the new Hit Stick, and hip checks are just some of the many gameplay improvements that make NHL11 the most authentic hockey video game experience to date.
All-New Broken Sticks - Broken sticks now affect the action in more ways than one. After snapping your stick on a wicked slapshot or having it broken in two from a hit, the play is never dead. Kick the puck to your teammate or have your teammate pass you his stick if you can't make it to the bench to get a new one.
Be a Pro Enhanced - For the first time ever, begin your career playing for the Canadian Hockey League's Memorial Cup. Playing with and against licensed CHL players from the Western Hockey League, Quebec Major Junior Hockey League, and Ontario Hockey League, experience both highs and lows of junior league hockey action. Get scouted, enter the NHL entry draft, and see if you can become the greatest player of all time.
All-New EASHL Dynasties - The EA SPORTS Hockey League takes online play to the next level as championship seasons are awarded with banner-raising ceremonies and new user celebrations that allow you to rub it in the faces of your biggest rivals. Prep your team for their playoff run with an all-new Practice mode.

Local Pickups
Buyer CAN pickup
Shipping Instructions
If shipping is desired, this item will ONLY be shipped via USPS First-Class Package Service, USPS Priority Mail, or UPS within 24 hours of payment completion (use the Postage Calculator to find your exact shipping rate). If paying via PayPal eCheck, item will not be shipped until eCheck payment completes (usually 5-7 business days). NOTE: We DO NOT SHIP via USPS Media Mail Parcel OR USPS Library Mail Parcel.

There are no messages posted.
You need to be logged in to ask the seller a question.
Click here to login