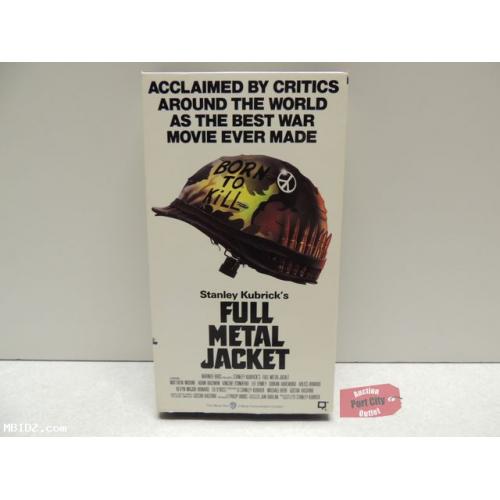 You are bidding on 1 VHS video cassette of FULL METAL JACKET.

In this riveting look at military life during the Vietnam conflict, Stanley Kubrick, who made the powerful antiwar classics PATHS OF GLORY (WWI) and DR. STRANGELOVE (the Cold War), once again explores the behavior of men in battle. FULL METAL JACKET (1987), adapted from Gustav Hasford's novel THE SHORT TIMERS, is broken down into two very different parts. The first half of the film focuses on the training of a squad of Marine grunts on Parris Island, and more specifically on the troubled relationship between the brutal drill sergeant (a frightening Lee Ermey) and an oafish misfit (a brilliant Vincent D'Onofrio) who just happens to be a sharpshooter. The second half takes the grunts to Hue City, where the climactic battle of the 1968 Tet Offensive--and the turning point of the Vietnam War--took place. The story is told through the eyes of Private Joker (Matthew Modine), a cynical aspiring photojournalist who is forced to fight for his life and the lives of his fellow recruits. Unusually for Kubrick, FULL METAL JACKET emerged at a time when a trend for films about Vietnam was in full swing. PLATOON had proceeded Kubrick's film by a year, and lesser efforts such as HAMBURGER HILL also emerged in 1987. London's abandoned docklands may not be the most obvious choice of location to replicate the ravages of the Vietnam landscape, but this is where Kubrick shot the film, sticking to his dogged principles of not shooting outside his adopted home. A moving commentary on the dehumanizing process that occurs when soldiers prepare and engage in battle, FULL METAL JACKET is an unforgettable experience from one of the most original voices to ever pick up a movie camera.

Local Pickups
Buyer CAN pickup
Shipping Instructions
If shipping is desired, this item will ONLY be shipped via USPS First-Class Package Service, USPS Priority Mail, or UPS within 24 hours of payment completion (use the Postage Calculator to find your exact shipping rate). If paying via PayPal eCheck, item will not be shipped until eCheck payment completes (usually 5-7 business days). NOTE: We DO NOT SHIP via USPS Media Mail Parcel OR USPS Library Mail Parcel.

There are no messages posted.
You need to be logged in to ask the seller a question.
Click here to login